PureVPN is a Hong Kong based VPN service provider and has been providing VPN service since 2006. In this PureVPN review, we will cover PureVPN’s features, server locations, price, security, connection speed and customer support etc.

PureVPN provides software and app for major operating systems such as Windows, Mac, iOS, Android and Linux. It offers unlimited server switching and unlimited data transfer. One convenient feature is called “Split Tunneling”, which allows users to choose which data to send through VPN and which to send through their ISP without going through VPN. Also, PureVPN’s desktop client comes with a Internet kill switch, which is a fail-safe button that helps maintaining user’s privacy and anonymity.

For simultaneous connections, PureVPN allows 5 devices to be connected at the same time, which is quite generous compared to many other VPN providers.

PureVPN does allow P2P, file sharing and VoIP (while many other VPN providers have restrictions in this respect). 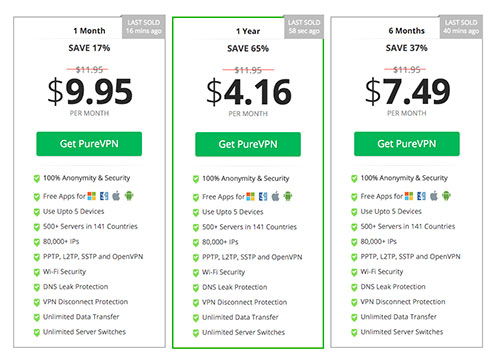 PureVPN’s price starts from $2.49 per month (if you pay for 2 year when signing up).

PureVPN offers a 7 day money-back guarantee for users to test out their VPN service.

Get PureVPN (with discount) >>

PureVPN provides free VPN software for Windows, MacOS, Linux,  iOS, Android and other supported devices such as router, Apple TV, PS3, Roku, Boxee and more. In addition, its VPN can be set up manually on these operating systems and devices.

For our testing, we downloaded PureVPN’s client software for Mac. The installation process is straight forward and the software interface looks clean: 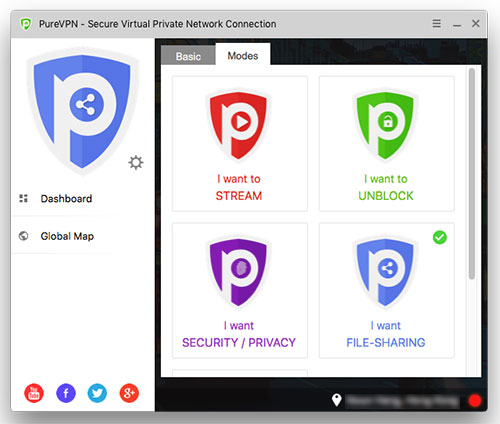 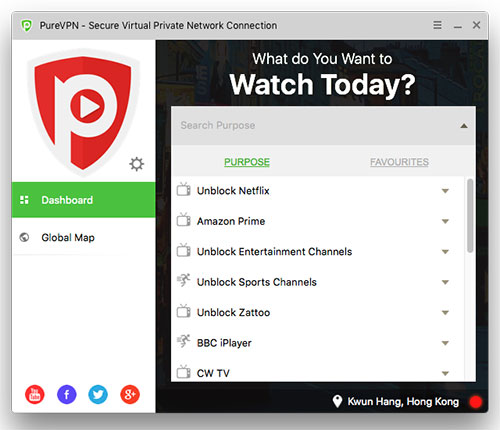 With PureVPN’s client software, users can connect/disconnect VPN, as well as to choose server locations and switch between different VPN protocols. One of the nice features is that the client software allows users to select different modes based on different purposes, for example, streaming, unblocking, security/privacy, file-sharing etc. It also provides a detailed purpose list including selections such as “unblock Netflix”, “Amazon Prime”, “Unblock Sports Channels”, “BBC iPlayer” etc.

Myself Vichu, Am a senior copywriter and an award-winning writer for more than a decade for various top brands. I have been internationally recognized for his contribution to Digital Marketing. In this blog am going to share some knowledge that I have gained in the past few years. For more info follow my blog.

View all posts by vichu →

Is A2 Hosting really as fast as it claims?

Tips on eCommerce SEO to rank on top of SERP

Reason why analytics for digital marketing is important

I receive customer referral fees from companies mentioned on this website. All data and opinion are based on my experience as a paying customer.